One of the more interesting and perhaps outrageous (to some) exhibition vehicles ever to come out of the Arfons shop was the infamous "Jet Barstool."

Born from an idea formulated in a neighborhood watering hole, Tim relates what happened.  He recalls, "I liked jets and I liked beer.  I remembered seeing barstool racing and I thought it would be cool to build one.

"I think I was sitting at the bar, called 'The Dump,' and came up with the idea right there while I was there drinking beer with my friends!"

It debuted in1996.  The engine is a surplus jet fuel starter from an attack fighter aircraft.  Its fastest time slip was 50 mph at Grand Bend dragstrip in Ontario, Canada, which incidentally was its last pass.

Tim says, "It sat for a while, and then I matched raced it against the 'Jet Outhouse' at the Bristol Dragway (Bristol, Tenn.), and won.

"It is retired, and still sitting in my office at the shop on Pickle Road.  It is the only vehicle I have saved.  Interestingly, the International Hot Rod Association (IHRA) asked me to bring it out of retirement in 2014 to run exhibitions, but I declined.

"The Barstool is a favorite to me, but at the same time it was the most difficult vehicle to drive I have ever built.  It was fun to run up until about 40 mph, but from 40 mph on, it was scary because it was so top heavy, had such a short wheelbase and the small, go kart tires.  I never considered letting anyone else drive it on the drag strip."

An interesting fact is that the Jet Barstool is listed in "Ripley's 'Believe It or Not'" as the "World's Fastest Barstool." 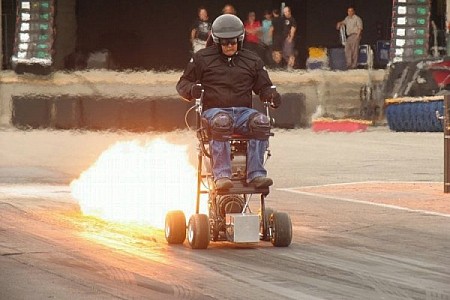