Over time, Tim's motorsports career drifted away from competition, and into the exhibition/showman phase.

The "Kamikaze" turbine-powered quads proved that the crowds at the indoor arenas with Monster trucks and pulling really loved the show that the "Kamikazes" put on.  So, with the encouragement of the promoters, Tim moved the focus to being an entertainer.

The Jet Jumper became a popular exhibition vehicle.  Built around a jet engine pod, the "Jumper" used a T-62 APU turbine motor. Because the Jet Jumper performed often in very tight basketball arenas, there was no room for it to get up to speed on its own, so a catapult launcher mechanism was built, using a 500 horsepower Boeing engine, used on minesweepers.

Tim recalls, "I went from stadium to stadium nationwide and also started doing some smaller stadiums.  I came up with the idea of catapulting myself since there was never enough room to get any speed up and definitely no room for stopping, just usually one skinny hallway to aim for.

"The first time we tested the Jet Jumper, I had no idea what to expect.  We had borrowed a 40-foot flatbed trailer and kept launching it until we cleared the trailer, which would have been about 6 car lengths.  And then we just kept adding cars to make the jumps longer."

While popular, the Jet Jumper could be evil.  "I hated it," Tim says.  "It was okay when we weren't jumping too far, but it got really unpredictable when I started jumping 13-15 car lengths.

"At the end, when we had reached the maximum capability of the launch tether rope, we crashed in Topeka and two weeks after that in Madison, Wis., we came in short and hit the soft dirt at the end of the return ramp head on.  The Jumper was upside down and on fire, with my seat belts on. All I could see was fire round me, but the safety team, led by Jim Weiner got me out.

"I didn't go to the hospital when that accident happened. I hurt my shoulder where the seat belts got me, and I also fractured my tailbone.  When I got home, I did go to the hospital.  Since I didn't want anyone in the hospital to know I was off doing stunts, I just told them I fell off a ladder."

The damage to the Jet Jumper was too great to repair, and aside from the driver's capsule/roll cage, it was scrapped.   In a sense, popular or not, the Jet Jumper's erratic, unpredictable behavior led to its end.  The driver capsule was used for the "Brilliant Bob" comedy stunt vehicle. 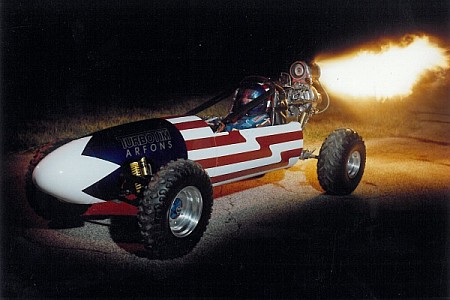